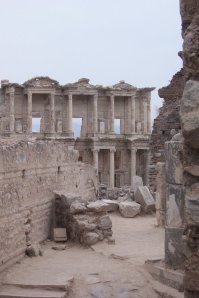 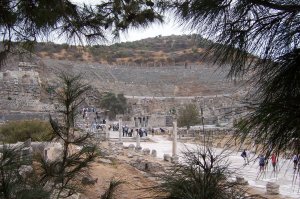 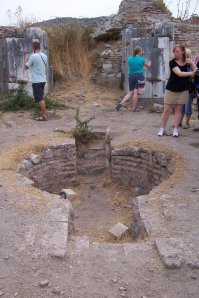 The next stop on our cruise was the ancient city of Ephesus. There used to be a port right next to it, but over the centuries the Aegean Sea has receded about 9 kilometers, so we pulled into the near port/tourist city of Kusadasi, Turkey.

Ephesus is still a beautiful city even though it has been reduced down to little more than facades and piles of rock. It was the “New York City” of ancient Asia Minor, with a large government, about 250,000 citizens, and thriving business/trade. I can definitely see why Paul spent 3 years of his ministry in that city. It would have been a beautiful sight to see during the time of the Roman Empire.

The top picture is the Library of Celsus, the third largest library of antiquity. It would have housed around 12,000 scrolls and documents. It’s beautiful 2-story facade is still standing majestically over the main street of the city. I can only imagine that Paul spent some time in this library studying history, philosophy, and theology – he just seems like that kind of guy.

The second picture is of the famous theater, which could seat around 50,000 people, easily. The acoustics are perfect. The engineers of old who designed it were masters. Pictures do absolutely no justice whatsoever as to the overall size of the structure. I can’t imagine what it would have been like for Paul to be brought before a packed theater of over 50,000 people yelling, “Great is Artemis of the Ephesians!”

Our group got an opportunity to sing The Greatest Commands standing at the bottom of the theater, where the speakers or performers would have been. It sounded incredible. It was an experience I will never forget.

The bottom picture is of a baptistery located in the Church of St. Mary. It was a touching sight to see. The church building dates back to the 6th Century AD, and the church was still practicing adult baptism at that time, and obviously it was by immersion. The building itself still has several walls standing with a pulpit area and alcoves on the sides where people would pray. The area around the baptistery was surrounded by walls decorated with crosses carved in stone. It was beautiful.