This was the home town of Peter, Andrew, James, and John. It was a small fishing town off the coast of the Sea of Galilee with a population less than 800. I say “was” because Bethsaida is one of the three cities in which Jesus preached that is no longer a city. Bethsaida, Capernaum, and Korazin are the three towns that Jesus actually prophecies against because of their unbelief, and none of those three towns are functioning cities today.

One of the coolest parts about the site is the location. From the hill upon which the town was located you can see the Mount of the Beatitudes, the Mt. of Tiberius, Capernaum, and most of the rest of the Sea. I would like to have seen it in the days of Jesus.

After seeing Bethsaida, we went down to the Sea of Galilee and were able to take a boat out onto the water. The feeling of being out on the very Sea that played such an important role in the ministry of Jesus was incredible. Words cannot accurately describe how awesome it was. All the Sunday school stories were flying through my head: Jesus calming the storm, walking on the water, preaching offshore in a boat, crossing the Sea to the mountains on the opposite side to find some privacy, telling the disciples to cast their nets on the other side of the boat, visiting the Sea and cooking breakfast after his resurrection. The Sea of Galilee and the surrounding cities played such a major role in his ministry that it’s difficult to even list all the events that took place in and around the Sea.

The boat ride itself was really fun. When we first set off from shore, the crew raised an American flag alongside the Israeli flag and played the national anthem, which was kind of cool. The crew also let us sing some songs and have a devotional time out on the water. After that one of the crew members gave us a fishing demonstration with the same type of net that would have been used in the first century. We didn’t catch anything (and we tried both sides), but it was still cool to see how these nets worked.

Back on shore, we went inside a small museum dedicated to the so-called “Jesus Boat.” It is the remains of a 2000 year old boat which was miraculously well preserved. It dates back to ca. 50BC, and was most likely still in use up until the Romans marched through Israel in the late AD 60s. It is speculated that this boat may have belonged to one or more of the disciples, like Peter or James. We know that very few fishermen could actually afford their own boats, much less one as large and as top-quality as this one. We do know, however, that Peter was living in the more up-scale town of Capernaum. We also know that James and John were the sons of Zebedee, who was a wealthy enough fisherman to have hired hands working for him. It’s possible that this 2000 year old boat could have either belonged to one of those families, or it could have at least been a boat in which Jesus road or from which he preached.

The Sea of Galilee may not be that large, but what it lacks in size it more than makes up for in beauty. The way the water and the surrounding mountains come together is an inspiring sight to behold. I can see why Jesus liked this area so much. 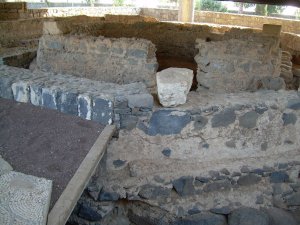 There are really two main features among the ruins of Capernaum: Peter’s house and the Synagogue. Capernaum is one of those three towns which is no longer functioning as a town and stands in ruins as Jesus prophesied. We do know that it was in use for a few hundred years after the time of Jesus because of the synagogue which was built in the early 4th Century AD. This synagogue was actually built directly on top of the synagogue in which Jesus would have preached in the town on several occasions.

The most famous feature of Capernaum by far is the house of Peter, in which Jesus healed Peter’s mother-in-law. This is one of the few exact spots in Galilee of which we are completely sure that Jesus was there. We know this because after only a couple generations a shrine was set up in that exact location. Peter’s house, right off the Sea of Galilee, was well known to all the disciples and many of the early Christians, so not enough time had passed for the exact location to be forgotten.

Today, there is a Catholic church constructed virtually hovering above the foundations of the house. Thankfully, we can look below the church building and see the whole foundation of the house. Ironically, the Catholic church holds Peter to be the first “Pope,” yet the very fact that he had a mother-in-law disqualified him from actually being a priest, much less the Pope. 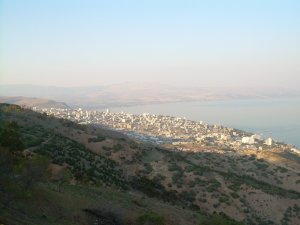 This mountain is the only lookout point (at least the only one accessible in the Israeli side) from which the entirety of the Sea of Galilee can be seen. Interestingly, the forest on the top of the mountain through which we hiked is called the “Switzerland Forest” because the majority of the funds to put in the trail and the lookout were provided by Jews who emigrated from Switzerland.

The view from the top is spectacular to say the least. By the time we got to the lookout point, the water was beginning to turn all shades of deep blues and purples. The sky around us was mellowing softly, and the breeze was blowing through the trees. It was fitting that our guide, Yosi, played a song for us on his flute that was inspired by the beauty of this region.

Mt. Tiberias overshadows the city of Tiberias, which is the largest city on the Sea of Galilee. If you remember, the Sea is called the Sea of Tiberias at many points in the gospels. The city, the mountain, and the Sea at one point were all named in honor of Emperor Tiberias who took over after Augustus. Bernice, sister of Felix (governor of the region in Paul’s day), had a palace in Tiberias. She, like many tourists today, made the city on the Sea her winter home because the climate is more tropical along the coast of the Sea. According to our guide (and Josephus) she was the most evil woman to ever step foot in Israel. I won’t go into great detail as to why he said that, but I just found it interesting. 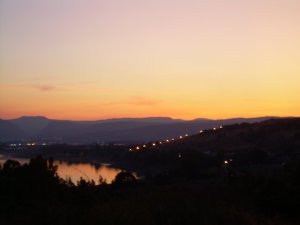 “Mount of the Beatitudes”:

Our last stop of the day was on the Mount (hill, really) where Jesus delivered his famous Sermon on the Mount. We arrived at sunset, which was absolutely phenomenal. As the sun was dipping below the hills, we read from Matthew 5-7 in the possible location where Jesus would have given the sermon. A more perfect scene could not be set.

The way the hill is set up, it makes sense why Jesus chose this spot. The shoreline at the base of the hill is flat for about 100 yards or so. From there it rises sharply upward for about 30 feet and then levels off again for a couple hundred yards. This explains why Matthew records the sermon as taking place on a hill and Luke records the sermon as being given on a level place. It’s both, really.

Anyway, there were some key parts of the sermon that resounded more resiliently in the actual context of even modern day Israel; sayings like, “Blessed are the peacemakers…” or “Seek first the kingdom of God and His righteousness…” There is still much fighting going on between Israel and her neighboring States over land and borders. The Jewish people are still caught up in an unhealthy sense of nationalism, which I believe could parallel that of the 1st Century. Jesus was basically telling them to stop fighting, stop worrying so much about the politics of everything, and pursue those things which are more important. Be peacemakers, not rebels and rioters. Seek God’s kingdom, not the kingdoms of man. It’s a lesson the Jews needed 2000 years ago, it’s a lesson they need today, and it’s a lesson that American Christians also need to take to heart.