Throughout history mankind has desired and sought after “signs and wonders” from the gods. Especially now that we live in such a science-driven, secular society, we think that the only way to truly believe something is to have tangible evidence. Honestly, the ancients weren’t much different. They didn’t just blindly believe in things they could never experience or test.

Ever since humanity first stepped on the scene we have been faced with death. It’s the one experience we know better than any other. Was it any easier for the ancients to believe a dead person had come back to life? Absolutely not. They needed some type of proof.

And some of them got proof.

And that seems unfair to us.

The thing we need to realize, though, is that even when we are staring the evidence in the face, it doesn’t mean we’ll automatically believe and everything will be better.

The reality is that seeing doesn’t always lead to believing.

Faith is a choice.

In Mark 8, some Pharisees came to “test” Jesus. They asked for a sign from heaven. Note that they didn’t ask for a sign from God, but a sign from heaven. The implication, according to some commentators, is that they were seeking some type of apocalyptic sign, i.e. a sign that would demonstrate the restoration of Israel and the judgment against their oppressors and the Gentiles. Simply put, they probably wanted a sign to show them that Jesus was who they thought he should be.

But Jesus did not come to bring judgment on the Gentiles. In fact he had just come from feeding thousands of them. Can you sense the irony? So, no. That sign would not be given. 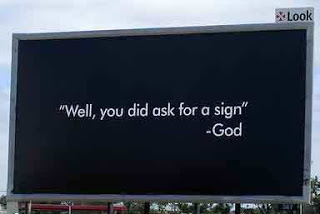 Another irony is that Jesus had given signs time and time again. Mark’s account is full of them to this point. He had calmed the seas (twice!), he had healed incurable diseases, he had shown his ability to forgive sins, he had even raised a dead girl back to life.

And they want a sign? No, Jesus did not owe them another sign if they are simply going to ignore all the others.

So what about us?

Well, if we’re honest with ourselves God has given us plenty of signs already. We just have to open our eyes to see them.

God is there. He has given us signs already. Let us pray that we may have eyes to see and ears to hear.