…or Why I Don’t Buy Into Evolution

I’m willing to give a little wiggle room to the theory of evolution. It has its benefits. It is one way of helping us understand the world around us. And on the purely animalistic side of it, survival of the fittest seems to be the natural order of things. The slowest, sickest zebra gets eaten by the lion. That lotion kills 99.9% of bacteria, leaving the strongest 0.1% to survive and grow into incurable super bugs. I get it. 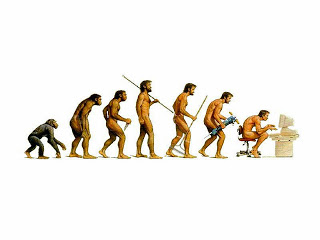 But I don’t see that happening in realm of human beings. And I don’t think it should be survival of the fittest. When that starts manifesting itself in society, weak babies are left to die in the elements and millions of people are slaughtered because they have the “wrong” genetic makeup.

So how could “survival of the fittest” have led us to evolve to the point of declaring that very idea morally wrong for humanity?

Also, if humans were still attempting to climb the evolutionary ladder, shouldn’t we be getting smarter as a species? But by all accounts we are collectively dumber than previous generations. Could we actually be devolving?

But what are we actually doing to get there?

I believe that Jesus of Nazareth was the wisest, most loving, most generous, and most genuine man to ever walk the earth. I believe he came to show us how to make the next generation better than the last. If we loved like he loved, if we behaved like he did, if we followed in his footsteps, then I believe we would see that dream fulfilled.

But sitting around waiting for evolution to get us there will never work. It’s not like Jesus himself was any further up the evolutionary scale than we are. In fact Scripture tells us that he was made like us in every way (Hebrews 2) and that he had no divine advantage in this life (Philippians 2). We are even reassured that Jesus was not born with any prior knowledge stored away in his infant brain. Luke tells us that “Jesus grew in wisdom and stature, and in favor with God and man.”

Jesus still had to go through childhood. He still had to mature mentally, physically, spiritually, and socially – just like each and every one of us. Children continue to face the same challenges that Jesus did – having to grow up in a corrupt, evil, fallen world. They have to learn everything they know. They have to be taught how to love – and how to hate. And yet we are living in a time when almost half of all children grow up in a broken home and society says that’s okay.

One day I have hope that we will see that dream come to fruition. I know one day that there will be no more hunger or poverty or oppression or corruption. There will be no more boundaries and people will be free to love completely. But God is in control of when that day comes, not evolution.

Until then, the responsibility lies with parents and with the church to help raise our children into the type of people needed to make the future a little bit brighter. Because God knows no one else is doing it.

We’re still growing in wisdom and stature and in favor with God and man – and I pray we never stop until that day comes.