When we left off, our rebellious prophet was recruiting the pagan Gentile sailors to assist him in committing suicide.

“Pick me up and throw me into the sea,” he replied, “and it will become calm. I know that it is my fault that this great storm has come upon you.” (Jonah 1:12)

But the sailors didn’t buy into this crazy scheme and tried for Plan A.2 – row to shore. But they couldn’t. God/the storm wouldn’t let them. Jonah tried to force God’s hand in overthrowing the Assyrians by running from the mission. Now God is forcing the sailors’ hands to throw Jonah overboard – Jonah’s idea, not God’s, just so we’re clear. God never asked this of Jonah.

Then they took Jonah and threw him overboard, and the raging sea grew calm…Now the Lord provided a huge fish to swallow Jonah, and Jonah was in the belly of the fish three days and three nights. (Jonah 1:15, 17) 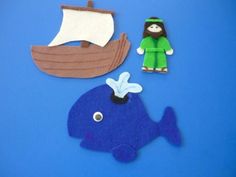 FINALLY! Here’s the fish! Now we get to pull out the flannel graph board and sick a kneeling/fetal-position Jonah onto a cutaway felt image of a whale fish. We get to sing the songs and put in the Veggie Tales movie!

This is where so many of us stop with the story of Jonah. It’s always David and Goliath, Daniel and the Lion’s Den, Jonah and the Whale Fish. But the story of Jonah is not about a big fish. The story of Jonah is about a God who is big with a big plan. The fish is mentioned in a whopping 3 verses – 1:17; 2:1; and 2:10. That’s it. And the whole fish scene isn’t even the most impressive miracle of the story. But we’ll get to that later.

Can you imagine drowning in the middle of the Mediterranean Sea? Drowning is one of the top fears among humans. A lot of people are hesitant to swim or get in a large body of water for fear of drowning. What a terrible way to die! I get panicky just thinking about it.

Jonah wanted to die. It wasn’t a heroic self-sacrifice to save the lives of the sailors. It was a selfish get-out-of-mission-work-free card. It was a last ditch effort to run from God. It wasn’t martyrdom, it was suicide.

So God gave him a taste of what Jonah said he wanted. Sometimes the worst thing God can do is to give us what we want. Look at this prayer of Jonah’s that we have recorded in chapter 2.

“In my distress I called to the Lord,
and he answered me.
From deep in the realm of the dead I called for help,
and you listened to my cry.
You hurled me into the depths,
into the very heart of the seas,
and the currents swirled about me;
all your waves and breakers
swept over me.
I said, ‘I have been banished
from your sight;
yet I will look again
toward your holy temple.’
The engulfing waters threatened me,
the deep surrounded me;
seaweed was wrapped around my head.
To the roots of the mountains I sank down;
the earth beneath barred me in forever.”
(Jonah 2:2-6a)

Maybe we have a hard time feeling sorry for Jonah, but I think we’ve all been there. Maybe you haven’t had the physical experience of drowning, but most of us have felt like we’re drowning figuratively – from stress, depression, broken relationships, pressure from school or work, the demands of everyday life that keep adding up. Maybe you’ve felt like you were drowning under the weight of some sin that has pulled you down – addictions, anger, lies, etc.

Every sin has a consequence. Sometimes we bring them on ourselves, and we have to face the natural consequences of our own dumb choices. Other times we have to pay for our actions through punishment or retribution. Or maybe we’re suffering under the consequences of generational/societal sin that we really didn’t have anything to do with, but we’re still negatively affected by it.

Every sin has a consequence.

I’ll say this. I don’t think God causes bad things to happen. But I believe God allows bad things to happen as a wakeup call. God didn’t cause Jonah to be thrown overboard. But God used this experience of drowning as a wakeup call to this rebellious prophet. God definitely got Jonah’s attention. It only took a trip to literal rock bottom. But for some people, like Jonah and like the younger brother in the Story of the Prodigal Son (Luke 15), that’s what it takes for them to come to their senses.

FINALLY the prophet of God actually prays to God – the first time in the whole book so far. Even when the sailors were crying out to their own gods and urged Jonah to do the same, Jonah kept silent. Jonah refused to even utter a word in prayer to God until his life was on the line. And when he finally decides to pray, what does he talk about?

He thanks God for saving him. He recounts his terrifying experience of drowning, sinking down to the “roots of the mountains.” The imagery Jonah uses to describe his underwater experience is quite similar to how other writers and poets describe Sheol, aka the grave or realm of the dead. Jonah is coming to terms with the reality of his watery grave.

But not so fast. What’s that? A giant mouth opening in my direction and sucking me in like a spaghetti noodle!

“But you, Lord my God,
brought my life up from the pit.
When my life was ebbing away,
I remembered you, Lord,
and my prayer rose to you,
to your holy temple.
Those who cling to worthless idols
turn away from God’s love for them.
But I, with shouts of grateful praise,
will sacrifice to you.
What I have vowed I will make good.
I will say, ‘Salvation comes from the Lord.’”
(Jonah 2:6b-9)

The punishment was the near death experience as he was sinking into the salt water. The salvation came in the form of fish guts. The “great fish” was God’s chosen means of salvation for his runaway prophet.

What a weird story.

And what a testament to the fact that God’s modus operandi for saving people is constantly changing. I’m glad this story never caught on in religious rituals. “In order to experience God’s salvation you must be swallowed and vomited up by a fish.”

Anyway, God saves Jonah. Jonah at least has the decency to acknowledge his need for God and his utter helplessness apart from God.

When you feel like you’re drowning – by sin, by stress, by life – this is a great prayer to go to. Read it. Reflect on it. Make it your own. We all have been at rock bottom before. We all know what it’s like to desperately cry out to God. This prayer in Jonah 2 is a great way to find the words if you don’t have them.

In fact, a song came out recently by Avril Lavigne. I hadn’t heard anything from her in years. Turns out she was battling Lyme Disease, an absolutely debilitating illness. In an interview she recalled a time in the hospital when the disease affected her lungs in such a way that it literally felt like she was drowning in that hospital bed. She fought through the disease, and is in a much better place now. But her first single released is called “Head Above Water.” The first time I heard it, I thought this is straight from Jonah’s prayer. If you haven’t heard it, check it out. It’s amazing.

More posts in the Jonah series:
Jesus Is the New Jonah…and So Are You
Unnecessary Sacrifice
Who Are You?
Wake Up, Idiot!
Bravely Ran Away
Nope
World’s Worst Prophet