I love the way Jonah 2 ends. Right after the prayer concludes, it says this:

And the Lord commanded the fish, and it vomited Jonah onto dry land.
(Jonah 2:10)

Can you imagine what that would feel like? It’s one thing to be swallowed, but to be vomited up? I can’t even handle it when one of my children throw up. I get nauseous and feel like I’m going to puke, too. Thankfully my wife has a stronger stomach and less of a gag reflex. The thought of actually being thrown up – along with all the bile and remains of undigested fish food….

But it’s really no different than what Jesus says about lukewarm, stale, tepid Christians.

I know your deeds, that you are neither cold nor hot. I wish you were either one or the other! So, because you are lukewarm—neither hot nor cold—I am about to spit you out of my mouth.
(Revelation 3:15-16)

When God commanded the fish to regurgitate the rebellious prophet, the fish was probably relieved. Jonah was that tepid, wishy-washy fence-sitter that Jesus warned about later in Revelation. Jonah probably didn’t set will in the fish’s stomach.

Then we see what I consider to be one of the most amazing sentences in the entire story as we being chapter 3.

Then the word of the Lord came to Jonah a second time.
(Jonah 3:1)

As a society we used to love good redemption stories. We like to see people who messed up get a second chance at life. But I don’t think we’re that way anymore. We want justice! We want people to get what they have coming to them! If someone is pegged as a racist, then that could be the end of their career. We’re so willing to dish out judgement and punishment that lives can be ruined for good based on a few Tweets in their past. We aren’t willing to help them work through their issues and give them a fresh start.

That’s the whole point of Philip Yancey’s book Vanishing Grace from a few years ago.

But I’m eternally grateful that while society may be short on Grace, God is overflowing with it. In the story of Jonah, it’s Jonah himself who is in most need of God’s grace. I think that’s the point.

The Bible is full of men and women who were given a second chance at life because of God’s grace. Just to list a few – Jacob, Moses, Samson, David, the Woman at the Well, Mary Magdalene, Peter, Paul. Each of these people had demons in their past (figurative AND literal). Jacob was a con-artist. Moses was a murderer. The Woman at the Well had a really checkered sexual history. Peter denied knowing Jesus. Paul used to persecute Christians.

Did any of these deserve a second chance? If they didn’t, then neither do I.

Jonah got a second chance because I think he hadn’t learned his lesson yet. Sure, he’s learned about God’s justice through the storm and about God’s mercy and salvation through the fish. But Jonah needs to learn more about God’s grace and love.

I know plenty of people demand justice for being wronged but then expect mercy when they are in the wrong. That’s Jonah’s outlook. Jonah was thankful to receive mercy for his own sinful actions, but he was still demanding justice to be done for the people of Nineveh.

GOD’S WORD, NOT YOURS

God says, it doesn’t work that way. God gave him these instructions:

“Go to the great city of Nineveh and proclaim to it the message I give you.”
(Jonah 3:2)

If Jonah were able to proclaim his own message, I wonder what he would say. Actually, I don’t have to wonder. All I have to do is get on “Christian” Twitter to see what the modern-day “Jonahs” are saying to their own “Ninevehs.” It’s not pretty. And it’s not good news. And it’s not changing any hearts.

We’ll get to what message Jonah gave to the people in Nineveh next time, but I don’t want to skip over this sentence:

Jonah obeyed the word of the Lord and went to Nineveh.
(Jonah 3:3a)

Does obedience indicate a change of heart? Nope. But it’s a start.

Imagine being covered in slimy fish bile and then having to make the 500+ mile overland journey to a foreign city. I bet Jonah had some interesting conversations along the way.

But here’s something you would miss if you didn’t do a little research into the ancient city of Nineveh. I’m just going to quote the Wikipedia article about it here. What do you notice about it?

The English placename Nineveh comes from Latin Ninive and Septuagint Greek Nineuḗ (Νινευή) under influence of the Biblical Hebrew Nīnewēh (נִינְוֶה[2] from the Akkadian Ninua (var. Ninâ) or Old Babylonian Ninuwā. The original meaning of the name is unclear but may have referred to a patron goddess. The cuneiform for Ninâ (𒀏) is a fish within a house (cf. Aramaic nuna, “fish”). This may have simply intended “Place of Fish” or may have indicated a goddess associated with fish or the Tigris, possibly originally of Hurrian origin. The city was later said to be devoted to “the goddess Ishtar of Nineveh” and Nina was one of the Sumerian and Assyrian names of that goddess.


That’s right. The name of the city literally meant “Place of Fish.” The symbol for Nineveh was a fish in a house. And they worshiped a god/goddess represented by a man-fish hybrid! 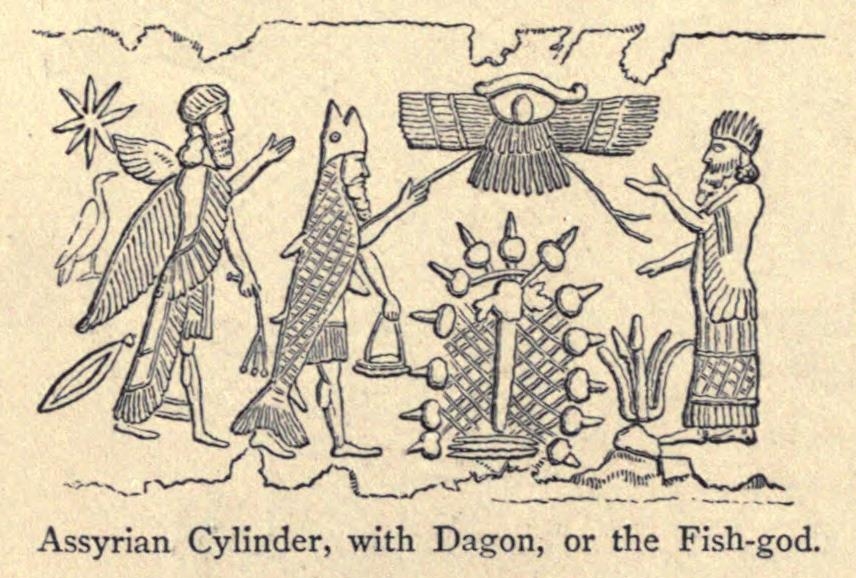 Tell me God doesn’t have a sense of humor. Jonah spends three days inside a fish. He is then vomited out of the fish and makes a three-week journey on foot just to be greeted by…images of a man-fish in the “Place of Fish.”