The history of Israel was a rough ride. You can read all the good, the bad, and the very ugly in the books of 1 & 2 Kings. God made a great promise to King David, but because of the foolishness of David’s own grandson, Rehoboam, the kingdom divided into two distinct nations – the 10 Northern Tribes formed the nation of Israel (also known as Ephraim), and the 2 Southern Tribes of Judah and Benjamin formed the nation of Judah.

The monarchies of these respective kingdoms were riddled with wickedness and sin. There was no one to keep the kings in line. They were answerable to no one, seemingly above the Law. So God raised up a school of Prophets who would be his mouthpiece to the kings. Samuel, Nathan, Elijah, Elisha, Jeremiah, Amos – all these men and more were God’s means of speaking truth to the powers that be. But none would be more well-known or have a greater lasting impact than the priest-turned-prophet Isaiah.

Isaiah would become the most-quoted prophet in the New Testament. His writings became known as “The First Gospel.” This is because much of what we know about Jesus’ life and ministry was foreshadowed in Isaiah’s prophecies. 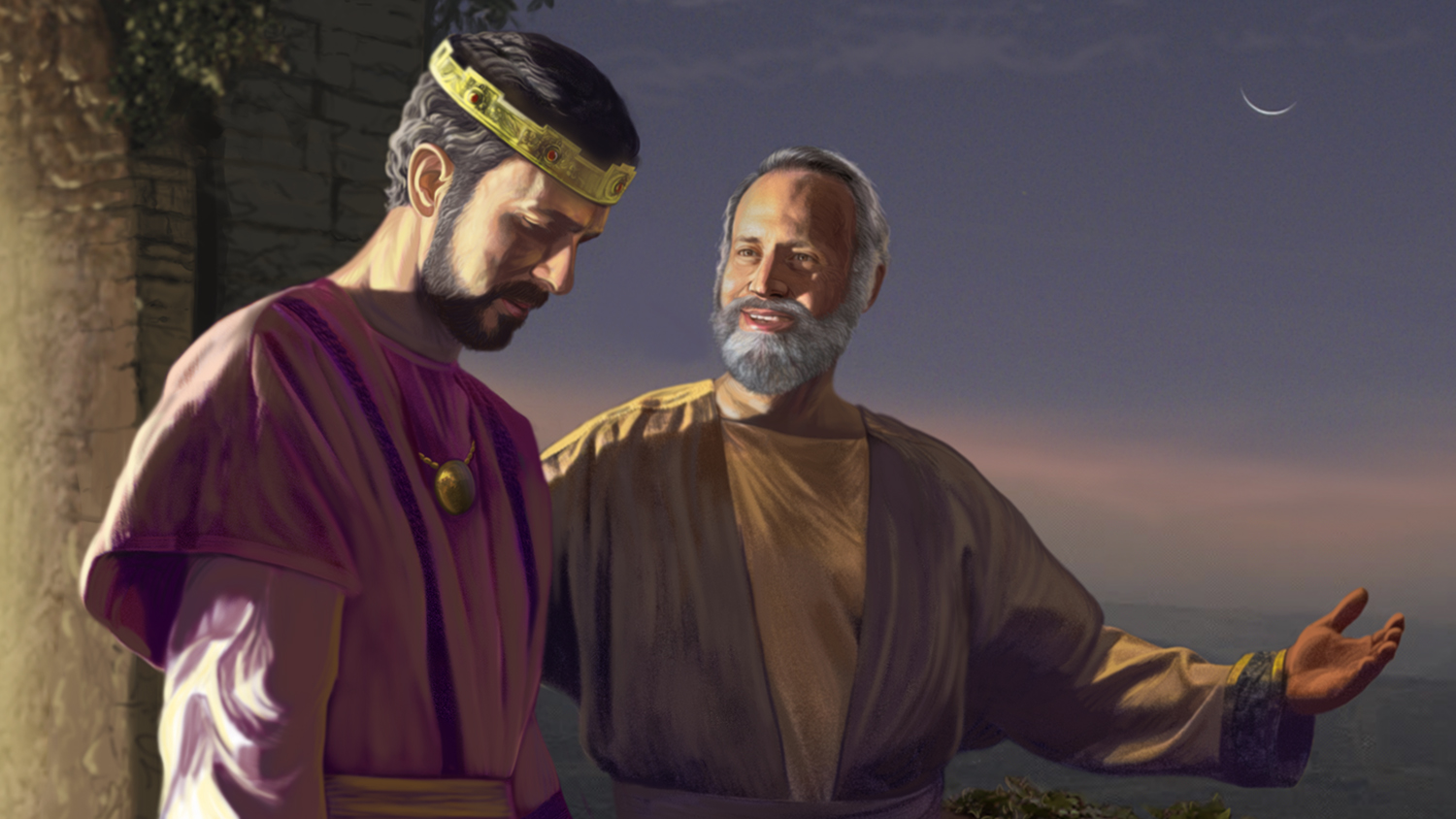 In chapter 7, Judah was being threatened by the joint armies of Aram and Israel. God reassured King Ahaz that the threat would pass and everything would be ok. In fact, God gave Ahaz a sign that God had everything under control.

Listen then. You are none other than the house of David, the one who inherited God’s promise of permanent kingship for David’s descendants. Is it so easy to be a bore to people that you would exhaust God’s patience too? Suit yourself. The Lord will give you a proof-sign anyway: See, a young maiden will conceive. She will give birth to a son and name Him Immanuel, that is, “God with us.”  There will indeed be something Godlike about Him. He’ll be eating curds and honey when he knows to choose what is right and good and refuse what is not. But before the boy has the wisdom to refuse evil and choose good the territory of the two kings you now dread will be abandoned.
(Isaiah 7:13-16 | The Voice)

When the Southern nation of Judah felt anger toward their Northern neighbors in the region of Galilee, God reassured them that things would not always be this way. Darkness will turn to light, night will become day, and enemies will become brothers once again – all because of a baby.

Hope of all hopes, dream of our dreams,
a child is born, sweet-breathed; a son is given to us: a living gift.
And even now, with tiny features and dewy hair, He is great.
The power of leadership, and the weight of authority, will rest on His shoulders.
His name? His name we’ll know in many ways—
He will be called Wonderful Counselor, Mighty God,
Dear Father everlasting, ever-present never-failing,
Master of Wholeness, Prince of Peace.
His leadership will bring such prosperity as you’ve never seen before—sustainable peace for all time.
This child: God’s promise to David—a throne forever, among us,
to restore sound leadership that cannot be perverted or shaken.
He will ensure justice without fail and absolute equity. Always.
The intense passion of the Eternal, Commander of heavenly armies, will carry this to completion.
(Isaiah 9:6-7 | The Voice)

God, through Isaiah, had much to say about this child who would come, who would be a sign of God’s presence with his people, who would reunite the people of God’s chosen nation.

Look here, let Me present My servant;
I have taken hold of him.
He is My chosen, and I delight in him.
I have put My Spirit on him;
by this he will bring justice to the nations.
(Isaiah 42:1 | The Voice)

The Servant, the Chosen One, the Beloved would be God’s agent for justice and righteousness in the world, calling people to faithfulness. But the words of Isaiah 52 and 53 also remind us that this Servant would suffer unimaginably at the hands of the worldly governments. The Servant, Emmanuel, would suffer and die and be vindicated by God for all to see.

See here! My servant will succeed.
He will grow in character and reputation, achieving high standing and status.
Just as people used to be shocked by you,
even so his appearance was disfigured;
His form—once glorious—was marred until it hardly seemed human.
Now many nations will be astonished at his prominence;
world rulers will be speechless in his presence,
For they will see what they’ve never been told;
they will understand what they’ve never heard.
(Isaiah 52:13-15 | The Voice)

It is only through the Chosen Servant’s suffering, death, and resurrection that he would complete the ultimate objective – bringing about God’s kingdom here on earth.

The Spirit of the Lord, the Eternal, is on me.
The Lord has appointed me for a special purpose.
He has anointed me to bring good news to the poor.
He has sent me to repair broken hearts,
And to declare to those who are held captive and bound in prison, “Be free from your imprisonment!”
He has sent me to announce the year of jubilee, the season of the Eternal’s favor:
for our enemies it will be a day of God’s wrath;
For those who mourn it will be a time of comfort.
(Isaiah 61:1-2 | The Voice)

The Messiah would be known as a Servant, on whom the Spirit of God would descend, and who would be chosen and loved by God – the one and only beloved. This Suffering Servant would right all wrongs and set the Kingdom of Heaven in motion, bringing joy and light and freedom and favor.

The Messiah is coming.