Earlier today, reports poured in from around the Sea of Galilee. This lake, a hub of fishing and other industry in this rural area, has lately been at the epicenter of some amazing claims. The latest witness reports indicate that a stronger than usual storm sprang up overnight, stirring the entire lake into chaos. Several fishing vessels were caught in the middle of the intense gale and were nearly capsized. According to several witness accounts, a Rabbi named Jesus of Nazareth allegedly stopped the storm as quickly as it had arisen.


Peter, one of Jesus’ disciples and appointed spokesman for the group, told reporters, “The storm came on us more suddenly than I’ve ever seen. One minute it was clear sailing. The next, everything was pitch black, and our boat started being tossed around like a child’s toy. With the waves breaking over the boat and the downpour of rain, we couldn’t bail out the water fast enough.” Peter and his brother Andrew were professional fisherman on the lake before becoming disciples of Jesus.

“I’ve seen my fair share of storms over the years,” Peter continued, “but nothing like this. I thought for sure we were going to die. But then I noticed Jesus in the back of the boat asleep on a cushion! I thought, Who could sleep at a time like this? So me and my buddies woke him up. Then Jesus made his way to the front of the boat, looked out at the storm, and – I swear – he shouted, ‘Shut up! Calm down!'”


According to Peter and the others in the boat, the wind immediately stopped, the waves calmed down, and the clouds vanished. “We were all terrified,” said Peter. “I mean, who does that? We still don’t know exactly how that happened. We’re still in shock.”


The story then takes a bizarre turn. Once safely through the storm, their boat made land at the local gentile cemetery on the other side of the lake in the region of the Gerasenes. As the sun was dawning and the disciples were making landfall, a local madman ran out to them yelling and screaming. After a brief conversation with Jesus, the Rabbi from Nazareth apparently cast out a “legion of demons” from the man. These demons then possessed a herd of pigs grazing at a nearby farm. Witnesses say the pigs turned mad and rushed off the side of the hill into the lake, drowning.

Our reporters caught up with the man, who wished to remain anonymous, after the fact. They found him well mannered and articulate. They asked him for his account of what happened. “The last few years have been a blur for me,” he began. “Once I felt the darkness take hold, I was powerless to stop it. I heard voices screaming in my head that no one else could hear. They told me to hurt myself. They wanted me to kill myself but I resisted that as much as I could. I didn’t know how much longer I could hold out, though. My family didn’t want me around. No one in town would take me in. I began living in the graveyard about a year ago. Local officials would try to bind me, but no matter what ropes or chains they put on me, I would somehow break through them.”


The owners of the nearby pig farm who lost their entire herd offered some of their own comments on what happened. “Yeah, he was crazy all right. No one wanted to go near there. We thought we were far enough away. Guess we thought wrong. Everyone had just kind of come to accept the crazy man in the cemetery. We figured he wouldn’t be around much longer, anyway. Seemed as good a place as any for him to die. But then that Jesus character showed up and ruined everything.”


According to the man’s testimony, the demons were terrified of Jesus. They thought he would send them to “the abyss” and destroy them. They begged to be sent out of the man and into the pigs. 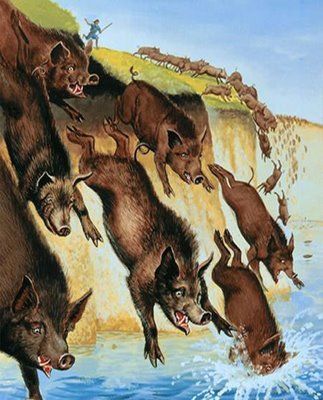 “We heard all this shouting and commotion,” said the pig farmer. “It was coming from the graveyard. Next thing we knew our pigs – about 2,000 of them, mind you – got this crazy look in their eyes. They grew restless and out of control. They broke straight through the fencing, ran down the hill, and to the last one they all drowned in the lake. There was nothing we could do. That was our entire livelihood – gone in an instant.”


The farmers ran back into town to tell the others what had just happened. A large number of the townsfolk came out to the scene of the incident.


“I’m not sure which was more upsetting,” said one local man, “the madman sitting there, still and calm, or the image of 2,000 pig carcasses floating in the lake. We were all shocked and horrified.”


All the townspeople urged Jesus and his disciples to leave.


“He had caused enough damage for one day. We may never recover from this,” said the pig farmer, visibly distraught.


Our reporters asked for one last statement from the previously-madman. “They asked him to leave. I tried to go with him! The last thing I wanted to do was stay around here, with the people who would just have soon seen me dead as healed. I wanted to go with him so badly, but he wouldn’t let me. He told me to go back home and tell everyone what the Lord has done for me. So I’m here to tell everybody that Jesus of Nazareth is unlike anyone I’ve ever met. Everyone was powerless to help, until he came ashore. There’s something special about him. Others may be afraid of him, but I owe my life to him. I’ll do whatever it takes to help those farmers recover, so long as they all know that Jesus has true power from on high.”


We may never know what really happened on the lake last night or on the shore earlier this morning. These claims are outlandish, some would even say blasphemous. But with so many corroborating witness accounts, it is difficult to dismiss the fact that something amazing did indeed happen. The Galilee Times will keep following the trail of stories left behind from Jesus, the Rabbi from Nazareth.