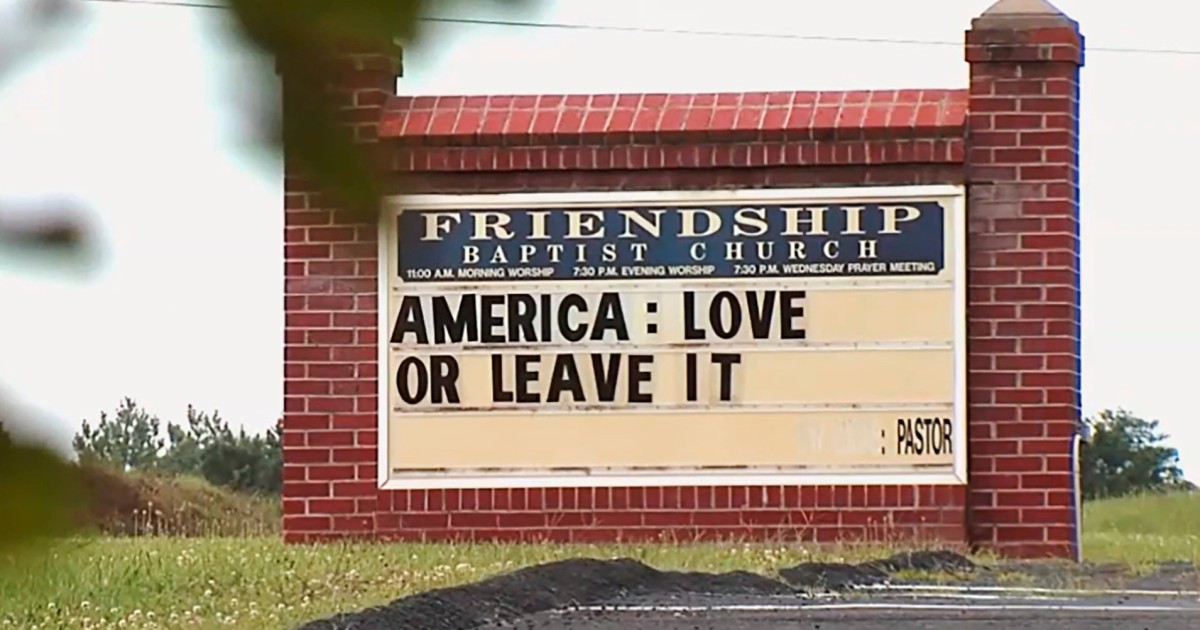 Maybe it’s just me, but I’ve seen an uptick in heated rhetoric like this:

America: Love It or Leave It

If you don’t like our country, then you can just leave.

This bothers me, and it always has. I remember when people said they would leave if Obama was elected president. Others said it about Hilary and Trump. It’s nothing new, really. But making the empty threat to leave the country if you don’t get your way is one thing. What’s happening now more than I’ve seen in the past is more of a threat against others. If you don’t like it, then just leave. You better love this country…or else. Why don’t you just go back to your own country.


Side note – it did make me chuckle when people said they would move to Canada or Europe if Obama was elected because he was too socialist… Um…should someone tell them?


Telling someone to leave the US if they don’t like it bothers me on many levels, both as a US citizen and as a Christian. Let’s see if I can put my thoughts and feelings into words.

IT’S AN INCREDIBLY PRIVILEGED IDEA
Americans in general are becoming less mobile than they once were. The internet and communications advancements have reduced the need to move across country for work. But when you factor in the rising cost of living in most areas, general economic insecurity, and the threat of unemployment with no guarantee of a job, moving locations within the country is cost-prohibitive to a large percentage of the population. In other words: Moving is expensive!

And that’s just within the country. How much more so to move out of the country. Not only is there an increased economic cost, but there is also the social and cultural cost of learning a new system of laws, new customs, even a new language. Let’s be realistic – leaving the country is not an option for the vast majority of citizens. Only those who move with their work and have expenses paid are able to do so. It’s a very privileged thing to assume that people CAN move in the first place.

IT’S A CALL FOR UNIFORMITY, NOT UNITY
Every single person has a different idea of how this country should be run. Not everybody is going to be happy all the time. That’s just the way life works. The question is: how do we respond when we are faced with a diversity of opinions?

If someone wants to challenge capitalism or the electoral college or the justice system, they are well within their rights to do so. We should hear them out. It’s funny how most of the people who use this “Love it or leave it” language are also the ones advocating for a “free marketplace of ideas.” The whole idea of a free market is competition that leads to innovation. If everyone only ever had all the same thoughts, opinions, and ideas, we would never be innovative or creative. We need unity through diversity – not uniformity.

THERE’S NO ROOM FOR EMPATHY
Imagine yourself as an asylum seeker in another country. You’ve never been there. You don’t know the language or the culture. You don’t know the laws. You are learning as you go. Imagine you’re able to enter the country and live there for a couple decades. You may find yourself missing home. You may find yourself wishing that some things were more like they were in your former country. You may even begin to suggest those changes or advocate for certain changes that you may think would benefit your current country. That doesn’t mean you want to go back home – this is your home now. It just means you care enough about your current country that you want to try and help make it better – according to your own opinion.

NATION STATES ARE NOT RESTAURANTS
“If you don’t like it, then leave and go somewhere else” works when it comes to restaurants and other businesses. That’s part of capitalism and the free market. Consumer choice plays a pivotal role in our economy. If I want a chicken sandwich, I can choose Popeyes, Chick-Fil-A, Wendy’s, or a whole host of other establishments. If there is a restaurant I frequent that changes management and suffers a decline in quality and service, then YES I will be going elsewhere. We can shop around. We can be picky. We have a choice.

That’s great when it comes to businesses, but nations don’t really work that way. Yes, you can technically leave, but it’s complicated and not feasible for most people. This perspective makes citizens into consumers and nations into businesses. When that’s the case, money is the only language that matters and those without it lose their voice.

WHAT ABOUT THE PROPHETS?
Switching to a biblical perspective here, a large chunk of Scripture is composed of prophetic writings. Have you ever read the prophets? You can’t tell me those men didn’t love their nation. You can’t tell me that Isaiah didn’t love Israel or that Jeremiah didn’t love Judah. Those men loved their God and their nations so much that they couldn’t HELP but speak out on the injustices and immorality they saw. To say nothing was not an option. They spoke out against the political rulers and the religious elites. They spoke out against war, violence, bloodshed, and the horrible treatment of the poor, widows, orphans, and foreigners.

The prophets spoke out against injustice and economic power imbalances not because they hated their country, but because they wanted the country they loved to be better. They could see the trajectory of their nations and knew it could only end in disaster. They didn’t hate their country any more than a coach hates his players or a lifeguard hates young swimmers. Jesus himself wept over Jerusalem and predicted the disaster that would befall them. Does that mean he hated Jerusalem? NO! He died to save it.

THIS IS BABYLON, NOT JERUSALEM
Closely tied to my previous point, Christians often believe that the US is the world’s savior, that we are that “shining city on a hill.” Maybe we have that potential, but we aren’t there right now, folks. And if we profess to follow Christ, our allegiance is to the kingdom of God above all nations. We are “strangers and foreigners.” We are looking for “a better country, a heavenly one.” So maybe we should take a page out of Daniel and Jeremiah’s playbook.

Through Jeremiah, God wrote a letter to the Israelites in exile in Babylon. You can read it in Jeremiah 29. Basically, God tells them to get comfortable and settle down. Build houses, plant gardens, get married and have kids, and work for peace in Babylon, because if it prospers, then they would prosper. At one point Daniel read that letter. Daniel took it seriously, because he made himself indispensable to the kings and rulers of Babylon and Persia. He was a foreigner working for the prosperity of his enemy nations in an attempt to change it for the better.

America is Babylon. America is Rome. We are in exile. As foreigners and strangers, we should work for the prosperity of whatever nation we find ourselves in. So let’s stop it with all the “love it or leave it” rhetoric, and let’s work together for the peace and prosperity of our nation. Let’s work for change. Let’s seek the kingdom of heaven here. Let’s stop trying to “Make America Great Again” and start bringing about God’s will “on earth as it is in heaven.” In God’s kingdom there is room for everyone. In God’s kingdom there are people of “every nation, tribe, people, and language.”

America: If you don’t love it….then let’s work together to make a little more like heaven.