I never knew my grandparents.

I am the youngest child of two youngest children (something I coincidentally share in common with my youngest son). All of my grandparents died before I could ever really get to know them. As I get older, that reality hits a little harder. I love that my sons get to grow up knowing their grandparents.

Because it connects them to the past. A relationship with their grandparents reminds them that the world was around before them and will be here after them. 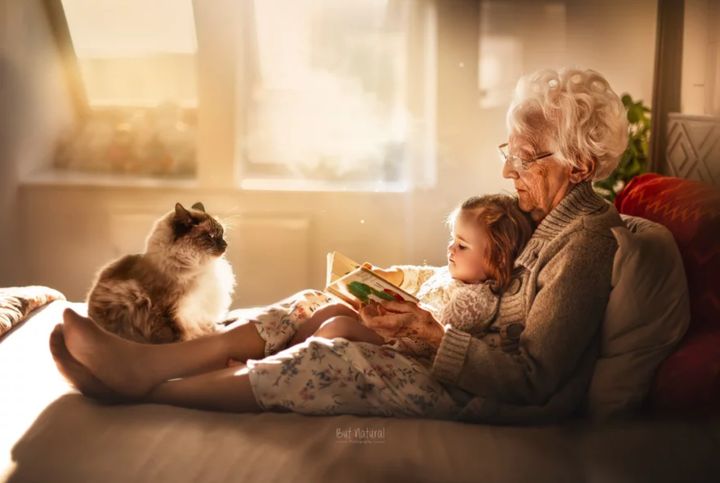 Generations fascinate me. I think there is so much we could learn from each other if we would just take a second and listen. I wish I could have had the chance to ask my grandparents what it was like to grow up in the Great Depression. Or what it was like to live through World War II. Or what church was like in the South during the Civil Rights movements of the 50s and 60s. What was is like to hear the news that President Kennedy had been shot? How did people in church respond when Martin Luther King, Jr. was assassinated? Did the moon landing rock your faith at all?

One day I hope my grandkids can ask me where I was on September 11, 2001, and how much the events of that day changed everything. I hope they can ask me about my first cell phone and smart phone, or about how the church responded to the LGBTQ revolution.

What does this have to do with anything?

In the end, all we have is our stories and our memories. Or as The Doctor used to say,

“We’re all stories in the end, just make it a good one, eh?”

I’ve heard it said recently that there are not really generations within the church. Each church is one generation of believers. I love that idea. The world wants to divide us up into generations. I’ve said it before, and I firmly believe it, that AGEISM is the most commonly accepted form of discrimination. Modern society is increasingly divided along generational lines.

When I read the writings of John, I hear the voice of an elderly Christian who is tenderly sharing his thoughts, experiences, and stories with his grandkids. I have no problem assuming that it was John the Apostle who composed the Gospel and Letters that bear his name along with the book of Revelation. And if that’s the case, we know from historic tradition that John was the oldest living apostle and the only one to die of old age.

John is writing to the next generation of believers. These were not eye-witnesses of Jesus’ ministry like John was. They did not have first-hand experiences with Jesus like John did. It reminds me of the first encounter Rey and Finn have with Han Solo aboard the Millennium Falcon in The Force Awakens. Han tells them a little bit about what he knows and has experienced. They are in awe and disbelief. He reassures this younger generation of ragtag runaways and rebels that, “It’s true. All of it.”

That’s what John is doing. Most of the original apostles, disciples, and church planters have died off. It’s nearly 60 years later. Many stories have been lost. Much teaching has been muddled or misconstrued. John looks around and sees what is becoming of this church that Jesus founded and charged them with expanding “to the ends of the earth.” So much has happened over the last 60 years that people are beginning to doubt, details are being lost, truth is getting mixed up with legend.

John looks at this new generation of Christians and reassures them, “It’s true. All of it.” He wants them to remember that he was there. He hugged Jesus. He ate with Jesus. He fished and camped and traveled and goofed around with Jesus.

John knows what Jesus’ voice sounded like. John remembers how infectious Jesus’ laughter was. John remembers the heartbreak and sorrow as Jesus wept outside Lazarus’ tomb.

John can remember like it was yesterday the moment Jesus was hanging, bloody and beaten, from the cross. He was there with Jesus’ mother when Jesus looked at the two of them and created an inseparable bond. They were family now. Mary had long since gone to be reunited with her Son. I wonder what Mary’s funeral was like? John could tell us.

John can still feel the rush of adrenaline pump through his aging veins as he recalls outrunning Peter to the tomb that morning but being too hesitant to go in. John can tell you exactly what the scars and holes in Jesus’ resurrected body looked and felt like. It was both gross and awesome.

John was there when Jesus ascended into heaven, but don’t ask him to describe it to you. He doesn’t quite have the words to explain it – and this was the guy who wrote Revelation.

But the thing I appreciate most of all in John’s letter is that he doesn’t come across as the “Old Man Yells at Cloud” type. He never uses the phrase, “back in my day.” He doesn’t complain about the current state of affairs or bemoan the loss of “the good old days.”

He’s writing this letter not simply to set the record straight, but to preserve unity and fellowship and love and joy. John doesn’t strike me as one constantly looking to the past, but as one eagerly anticipating a future filled with more believers, more faithful followers, more loving brothers and sisters, more grandkids in the faith. He doesn’t look to the future with fear and anxiety but with hope and excitement. Each day brings us closer to Christ, closer to each other, closer to the Kingdom of Heaven.

I think John is someone worth listening to. Even though he has been gone from this earth for nearly 2,000 years, his legacy lives on, and he has much to say to us next-generation disciples.