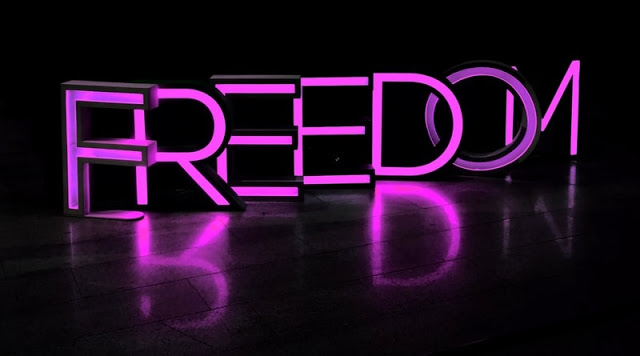 But long before there was a United States of America, there was a longing for freedom. There is something innate within us as humans that longs to be free. Free from constraints and responsibilities and consequences. Free to make our own choices and mistakes. Free to say what we want, think what we want, act how we want, and get what we want.

We long to be free. So what about this freedom we have in Christ? One of the last things people think of when it comes to religion is freedom. Sure, we have the freedom to practice our religion without fear of state persecution. But when we follow a religion we are willingly assuming more constraints on our lives and are therefore less free. Right?

Jesus came to preach freedom as part of the Kingdom of Heaven.
He stood up to read, and the scroll of the prophet Isaiah was handed to him. Unrolling it, he found the place where it is written:
“The Spirit of the Lord is on me,
because he has anointed me
to proclaim good news to the poor.
He has sent me to proclaim freedom for the prisoners
and recovery of sight for the blind,
to set the oppressed free,
to proclaim the year of the Lord’s favor.”
Then he rolled up the scroll, gave it back to the attendant and sat down. The eyes of everyone in the synagogue were fastened on him. He began by saying to them, “Today this scripture is fulfilled in your hearing.”
(Luke 4:16-21)

Jesus replied, “Go back and report to John what you hear and see: The blind receive sight, the lame walk, those who have leprosy are cleansed, the deaf hear, the dead are raised, and the good news is proclaimed to the poor. Blessed is anyone who does not stumble on account of me.”
(Matthew 11:4-6)

To the Jews who had believed him, Jesus said, “If you hold to my teaching, you are really my disciples. Then you will know the truth, and the truth will set you free….So if the Son sets you free, you will be free indeed.”
(John 8:31-32, 36)


So we have freedom in Christ as his followers. But there are ways we might not be as free as we think. If Jesus came to bring freedom, you better believe that Satan wants to keep us in bondage as long as possible. There may even be ways in which we think we are free but really aren’t. Let’s use three examples from the animal kingdom that I think are every bit as applicable to our own lives.

HOW TO TRAP YOUR MONKEY


As they were walking along the road, a man said to him, “I will follow you wherever you go.”
Jesus replied, “Foxes have dens and birds have nests, but the Son of Man has no place to lay his head.”
(Luke 9:57-58)

Do you have pesky monkeys making a mess of everything around your property? Do you want to trap them and get them away from your house and land? Then try a gourd trap.

The way it works is incredibly simple. Just get a large gourd and cut a small hole in the side. Hollow out the entire inside and then place a shiny ball of foil, a coin, or even some rice inside. The monkey will see the desirable object and reach in to steal it. The hole will be large enough for the monkey to slip its hand into; however, once the monkey has a hold of the object it cannot remove its balled up fist.

All it has to do is let go of the object and slip its hand back out, but it won’t. It’s trapped. Congratulations, you’ve caught a monkey.

How many of us can relate? We are just like that monkey. We know what we need to let go of, but we can’t. Is it a grudge? A bad habit? An addiction? A toxic relationship? A too busy schedule?

It seems cliche, but there is freedom in letting go. The enemy knows exactly what to put in that gourd to trap us. For some it might be the pursuit of more financial success or that promotion at work. For others it might be recognition in the community or becoming captain of your ball team. Maybe it’s family.

It doesn’t have to be a bad thing in that gourd. It just has to be something you aren’t willing to let go of. That’s why Jesus said that unless you deny yourself, take up your cross and follow him, you can’t be his disciple. He told the rich young ruler to sell all his possessions and then come follow him. The guy couldn’t do it. He couldn’t let go.

What are you holding onto in that gourd? Let it go. Give it up so that you can find real freedom.

THE ELEPHANT AND THE ROPE

There is a story told of a man traveling abroad. He passed by another man with an elephant. The elephant, he noticed, was enormous yet it was held in place by a small rope tied to a metal stake stuck in the ground. If the elephant wanted to he could easily pull free and be on his way. The traveler was intrigued, so he asked the owner how he kept this massive animal contained with a simple rope and stake.

The owner answered that when the elephant is very young they tie a larger rope around his leg and attach it to a much stronger post. The elephant pulls and pulls but is never able to budge. It is truly stuck. So it learns as it gets older that as soon as it feels the rope around its leg and a little bit of resistance, it is stuck and cannot go anywhere.

The elephant is conditioned to think it is trapped even though it could easily be free. The only thing holding it back is its past conditioning.

I’m all for raising children with guidelines, rules, and boundaries. But as they get older, they must experience freedom from those constraints.

The same goes for our faith. I hear people say, “I wasn’t raised that way” or “that wasn’t what I was taught.” Well, maybe it’s time to tug a little harder on that tradition or teaching. Maybe it’s time to stop letting our past and traditions hold us back from experiencing the freedom we have in Christ. We might be resigned to doing things the way they’ve always been done because we feel bound by our past. But Jesus came to bring freedom. Retrain your brain to pull. You are stronger than your past. You are capable of enjoying the freedom you have in Christ now without being a prisoner to your upbringing.

THE BUCKET OF CRABS


Still another said, “I will follow you, Lord; but first let me go back and say goodbye to my family.”
Jesus replied, “No one who puts a hand to the plow and looks back is fit for service in the kingdom of God.”
(Luke 9:61-61)

Maybe you’ve heard of “the crab mentality.” It’s a concept that comes from those who catch crabs. If you put one crab alone in a bucket, it will almost certainly climb out and escape. However, if you get several crabs in a bucket, they will keep each other from escaping. If one attempts to scale the walls to freedom, then other crabs will reach up and pull that rebellious crab back down into the bucket with the others where it belongs.

You can probably see where I’m going with this. The “crab mentality” is a phenomenon that happens in social circles all the time. If someone begins to excel academically, they are bullied. If someone stands out on the ball court, then they are called a showoff or ball hog. If someone gets on fire for Jesus, then they are ostracized or ridiculed until they calm back down.

The crab mentality keeps too many people from pursuing their dreams because of all the nay-sayers around them. It keeps people from stepping out in faith because “we’ve never done it that way.” It keeps people from truly following God’s calling on their lives because my parents would kill me if I left college to become a missionary.

DO YOU WANT TO BE FREE?


It is for freedom that Christ has set us free. Stand firm, then, and do not let yourselves be burdened again by a yoke of slavery.
(Galatians 5:1)

In each of those three interactions Jesus has with would-be disciples in Luke 9, we see something holding them back from experiencing the freedom that comes from following Christ. The first didn’t want to let go of the life he had built for himself. He wasn’t ready to sacrifice all the things he had worked for. The second wanted to follow Jesus, but he wanted to wait until his father died. The indication is not that his father is already dead and he has to go to the funeral. The text implies that the father is still living, and this man can’t follow Jesus until his dad is out of the picture. He is letting his past and upbringing keep him bound. He should be free to leave any time he wants, but it’s his relationship with his father that is holding him back. The third wants to say goodbye to his family. That seems reasonable, but the implication is that his family isn’t coming along with him. If he goes back now, there is the real chance that they could dissuade him and pull him back into that bucket.

How badly do you want it? If you want true freedom in following Christ, then you must let go of whatever you are holding onto; you must stop letting your past hold you back; and you must determine to follow no matter who else goes along with you and no matter what anyone else thinks or says.

What’s holding you back most often? Are you a monkey, and elephant, or a crab?