Days one, two, and three were all about separating – light from darkness, waters above from waters below, dry land from the seas. Now we make a shift from separating to filling. Days four, five, and six fill what was separated on the first three days.

On day one, God created light and separated it from darkness. Now he fills the light and dark with the sun, moon, and stars. But notice how he doesn’t give them names. Why?

In the cultural context in which this poem reached its final form – probably in Babylonian exile – the study and worship of the heavenly bodies was very common. Most ancient cultures regarded the sun and the moon as major gods/goddesses. The stars and planets also played a role in giving “signs” from the gods. The creation song in Genesis simply regards them as “the greater light,” “the lesser light,” “…and also the stars.” The importance is placed on the Creator, not the creation. The sun and moon were set in place to “govern” under the sovereign kingship of God.

But this is not just the creation of the heavenly bodies. It’s also the creation of time itself. Their job was to give light to the earth AND to mark days, years, and sacred times. God is already building a rhythm of time into his creation. Evening, morning, days, weeks, months, years, holidays – God created the sun and moon to help keep track of it all.

When I consider your heavens,
the work of your fingers,
the moon and the stars,
which you have set in place,
what is mankind that you are mindful of them,
human beings that you care for them?
(Psalm 8:3-4) 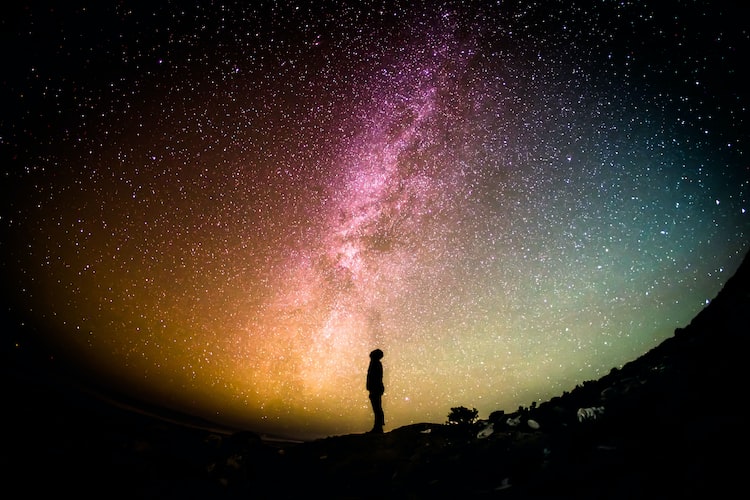 The heavens declare the glory of God;
the skies proclaim the work of his hands.
Day after day they pour forth speech;
night after night they reveal knowledge.
They have no speech, they use no words;
no sound is heard from them.
Yet their voice goes out into all the earth,
their words to the ends of the world.
(Psalm 19:1-4a)

Think about how big of a deal celestial phenomena still are. There is still a ton of hype and excitement around solar and lunar eclipses, blood moons, and meteor showers. Even though we can explain it all, we continue to experience a deep emotional reaction in our core.

Nothing can make you feel quite so small as studying the stars and planets. We cannot wrap our minds around the size and scale of our solar system or our galaxy or our universe. I get a sinking feeling in the pit of my stomach just thinking about it. But to know God is bigger than that and he still chooses to care for you and me…that is the most shocking realization of all. To see pictures like this…

…and know that God loves all 7 billion people on that “pale blue dot” hurtling through space…I don’t even have words. Is certainly puts this verse into a whole new perspective:

For God so loved the world that he gave his one and only Son, that whoever believes in him shall not perish but have eternal life.
(John 3:16)

Do you have a favorite constellation? What is it, and why?

When was the last time you simply looked up at the clear night sky? How did it make you feel?

The Pleiades and Orion are two constellations mentioned in the Bible. In Job 38:8 God asks, “Can you bind the chains of the Pleiades? Can you loosen Orion’s belt?” It wouldn’t be until centuries later that we discovered a little thing called gravity. With the invention of telescopes and the discovery of gravity, our understanding of the cosmos changed. It turns out the stars that make up the Pleiades constellation are gravitationally locked in place (Can you bind the chains of the Pleiades?), and the stars comprising Orion’s belt are actually drifting farther away from each other through space (Can you loosen Orion’s belt?). **MIND BLOWN**