“You shall not misuse the name of the Lord your God, for the Lord will not hold anyone guiltless who misuses his name.”
(Exodus 20:7)

Your name is the loudest, most important word in your vocabulary. From before you were born, you were probably addressed by name. Your parents chose a name that was important and meaningful to them in some regard. When someone needs you, they call your name. You want people to know your name and call you by name. If they don’t know your name, especially after some time knowing you, or they get your name wrong, it can leave you feeling insulted or demeaned.

Or worse, when someone ascribes some actions or beliefs to you, associating your name with something you would never do or think or condone, it can leave you feeling utterly betrayed.
“Daniel thinks it’s no big deal for people to use the express checkout lane with a cart full of groceries.” I NEVER SAID THAT!

So why do we do that with God’s name?

The Jews took this command so seriously that we don’t even know the true covenantal name of God. They chose not to insert the vowels in the name YHWH, so the literal pronunciation is lost to history. They also would replace the name YHWH with Adonai (or LORD) when reading from the sacred texts so as not to misuse God’s name. Even today, many Jews will write G-d so as not to break this third commandment.

You get the point. Stop using the name of God as an explicit, a curse, or an exclamation. Find something else to say.

But this command goes deeper than that. If this is where we stop, then we miss the more important prohibition in this command. To misuse God’s name also means to use it incorrectly – slapping God’s name on something in order to gain support or power. When we use God’s name to advance our own career, agenda, ideas, or merchandise, we are breaking the third commandment.

There’s a weird story in 1 Kings 13 where God sent a prophet to King Jeroboam and then told him to leave without staying to eat. The prophet left, but while he was on his way another “old prophet” caught up with him and lied to him. “I too am a prophet, as you are. And an angel said to me by the word of the Lord: ‘Bring him back with you to your house so that he may eat bread and drink water.’” The first prophet went home with the guy and later was killed by a lion. Sometimes people use the name of God to add authority to their ideas. We must be discerning and realize when someone is trying to pull one over on us. 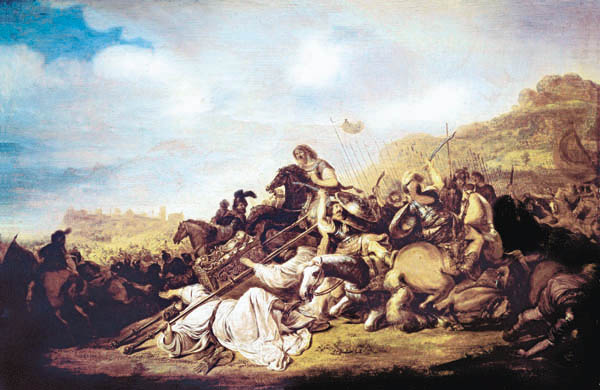 There was another time when the Israelites were at war with the Philistines. They decided to bring the Ark of the Covenant out to the battle to prove that God was on their side. They were misusing the name of God. The Philistines won the battle and captured the Ark.

But probably my favorite cautionary tale against breaking this command is in Acts 19. These Jewish guys were going around driving out demons and using the names of Jesus and Paul in order to add some authority to their business. The story that follows is hilarious.

Some Jews who went around driving out evil spirits tried to invoke the name of the Lord Jesus over those who were demon-possessed. They would say, “In the name of the Jesus whom Paul preaches, I command you to come out.” Seven sons of Sceva, a Jewish chief priest, were doing this. One day the evil spirit answered them, “Jesus I know, and Paul I know about, but who are you?” Then the man who had the evil spirit jumped on them and overpowered them all. He gave them such a beating that they ran out of the house naked and bleeding.
(Acts 19:13-16) 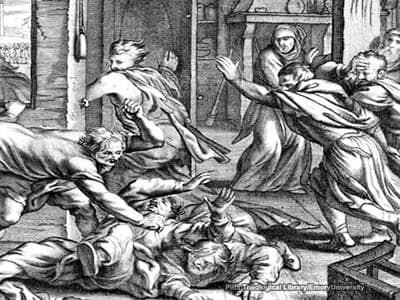 The name of God is to be kept holy (see the Lord’s Prayer). That means we should honor and revere the names of God the Father, Jesus Christ His Son, and the Holy Spirit. We should not use them flippantly as expletives or exclamations. And neither should we use them as a way of promoting our own agendas, beliefs, politics, or businesses.

When a band can’t make it in the main stream so they sign with a Christian label just to sell more albums and show tickets, they’re using God’s name in vain.

When a politician has no previous religious affiliation suddenly begins quoting the Bible in order to appeal to his faith-based voters, he’s using God’s name in vain.

When a country claims to be a Christian nation but repeatedly and systemically abuses minorities, immigrants, and the poor, that country is using God’s name in vain.

When a business capitalizes on a Christian market for their t-shirts, hats, bracelets, bumper stickers, coasters, breath mints, and cheesy paintings, they are using God’s name in vain.

When a political party uses religious rhetoric and Scripture to convince people that “real Christians would never vote for those other guys,” then they are using God’s name in vain.

When we allow ourselves to be convinced that God’s will can only be carried out through government intervention, then we are using God’s name in vain.

There is only one name that can save – and it’s not Washington, DC. It’s not Trump or AOC. It’s not Republican or Democrat. It’s not anything under heaven except one name.

Salvation is found in no one else, for there is no other name under heaven given to mankind by which we must be saved.
(Acts 4:12)

Why do you think it’s so easy for us to exclaim “Oh my God” on a regular basis? Does this bother you? Do you even notice it anymore?


What do you think about the lengths the Jews would go in order not to misuse God’s name? What would people think if we showed that same level of respect?