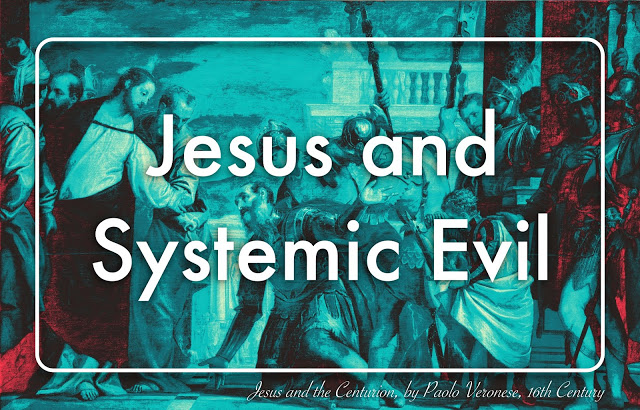 When Jesus talks to the Jews about their “enemies” he is undoubtedly referring to Rome. The Roman Empire is THE enemy in the New Testament. And everywhere they looked there were reminders of Rome, reminders of who was in charge, who called the shots, who ran the show. Israel did experience a certain level of freedom and autonomy – but only if they kept themselves in line.

But even so, Rome wanted to make sure that nobody forgot who was the boss. Their coins were imprinted with the profile of Caesar. They used these coins to pay taxes which were collected by fellow Jews who had defected to serve the cause of Rome. These taxes went to support the Roman military machine, including the occupying Roman soldiers in every town of significance.

Roman soldiers were basically the closest analog to law enforcement officers that we see in Scripture.

Maybe you can see where I’m going with this.

With all of this in mind, we now turn to the story of the Roman Centurion in Matthew 8 and Luke 7. As Jesus approached Capernaum, the Roman Centurion in command of the garrison just outside of town came out to meet Jesus (Matthew’s account) or sent someone to speak on his behalf (Luke’s account). Capernaum was a sleepy little fishing village. It was Peter’s and Andrew’s hometown, and it served as Jesus’ base of operations during his Galilean ministry. 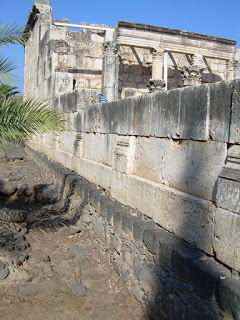 So the Roman Centurion pleads with Jesus to heal his personal servant whom he holds in deep regard. Here’s the cool part. This Centurion is one of the good ones. We don’t know much about him, but Luke’s account informs us that this Centurion provided the funds for the residents to build a synagogue in town. He is well-respected by the people of Capernaum, which is significant and speaks volumes about the character of this man.

I don’t want to focus on the request and the miracle itself, because if we peel back the layers, the miracle is the least significant part of this exchange. There are three things I want to highlight.

1. The Centurion calls Jesus “Lord”
No, this is not a divine title. It’s not the same as saying “Jesus is Lord.” Lord means “master” or “sir.” It’s a title of respect, acknowledging the authority of a person in power.

Stop. Sit with that for a moment.

Here’s a Roman Centurion, leader of a hundred or more soldiers in the most effective military the world had ever seen. He was a man of power, wealth, privilege, honored and revered by all. And he called Jesus – a poor, homeless, dark-skinned, Jewish rabbi, one who was at the bottom rung of the Roman societal ladder – Lord. He said, “I’m not worthy to have you come to my house.” This Centurion set aside his power, privilege, and dignity in order to elevate this poor, homeless, dark-skinned Jewish man. Let that sink in.

2. Jesus commends the faith of the Centurion
Again, we don’t know much about this man, but he wasn’t Jewish. He wasn’t an Israelite. We have no indication that he believed in YHWH or held any interest in the Jewish religion at all – apart from funding their synagogue. He was an outsider. As much as a typical Roman authority figure might look down on the Jews, the Jews were also very prejudice against Roman authority figures.

But this guy gets it, and Jesus honors him for it.

3. Jesus once again reminds us this kingdom is different
I’m sure a crowd had formed at this point. At the very least his disciples were there. After praising the faith of this Centurion, he turned around and basically told his followers and bystanders, “Get used to it.” People are going to be coming from all over the place to be a part of this thing, while the locals are going to miss it entirely.
__________________________________

Roman Centurions were terrible. The whole system was rigged against the Jews. They had very limited rights and freedoms. One of the most “ominous weapons” at Rome’s disposal was the cross of crucifixion. Rome loved using this torture device to snuff out rebellions and to serve as a warning to any would-be insurrectionists. Roman soldiers would carry out the floggings and beatings. They were the muscle of the empire. They would hammer the spikes through the hands and heals of anyone who dared to challenge the might of Rome. Crucifixions in the thousands were not uncommon, and they were overseen by Centurions.

This was a system of evil meant to keep the Jews in their place.

So does this interaction between Jesus and the Roman Centurion mean that he approved of the system and supported all Roman officers? Absolutely not! It was this very system that would ultimately torture and kill Jesus on false charges, without a fair trial, and with no mercy. But even from the cross Jesus cried out, “Father, forgive them for they don’t know what they are doing.”

Here’s the takeaway. As a follower of Christ, I can support, respect, and love law enforcement officers – while also being critical of the system of violence, brutality, oppression, and injustice. I can show my respect and appreciation for American soldiers – while also standing against war and needless bloodshed.

Jesus shows us that we can and should love the people while also speaking out and advocating for change within the systems. In other words – “Love the sinner, but hate the sin.”

Jesus certainly wasn’t advocating for the Roman occupying forces. But he honored the lives of the Roman soldiers he encountered and even prayed for the forgiveness of those killing him.

And it’s not just Jesus. We see the same thing happen with Peter and Paul. Peter famously travels to the house of Cornelius, another Roman Centurion. He preaches to his entire household and baptizes them all. Peter would later be crucified upside down by Roman soldiers under the orders of Caesar Nero.

Paul wrote in his letter to the Romans for them to follow the laws and obey those in authority. But then  Paul would later be beheaded, also under Nero.

By now we’ve all seen the videos. We’ve all heard the accounts. There are dozens of videos circulating of police officers kneeling with, marching with, and praying with protestors. But there are also dozens of videos of police officers beating, pepper-spraying, and needlessly arresting protestors. I want to echo the words of Jesus when he prayed, “Father, forgive them, for they know not what they do.”

As Christians we are encouraged and instructed to pray for those in power, to obey those in authority, and to honor the king. But we are also told to take up the armor of God so that we can stand against the evil schemes of the devil, “against the rulers, against the authorities, against the powers of this dark world and against the spiritual forces of evil in the heavenly realms.”

I appreciate the sacrifices that our law enforcement officers make on a daily basis. One of my Elders is a State Trooper. His Facebook post the other day really pricked me. It’s easy to scapegoat the police right now as the cause to all our problems. But I don’t think that’s fair because a) they are victims of sin just as much as any of us, and b) systemic problems by definition are multifaceted and complex. So I support and respect our officers of the law. I can’t imagine what they’re going through right now.

Racial inequality has plagued humanity since civilization began. Anyone who fights for equality will meet incredible resistance. But the way of Jesus shows us what it looks like to fight the system. It looks like the Oppressor calling the Oppressed “Master.” It looks like intentional diversity, forcing us to get outside our comfort zone. And it looks like an innocent man wrongly executed by the state crying out, “Father, forgive them for they know not what they do.”