Have you heard of cognitive biases?

Everyone has them. If you think you don’t, then that’s called the Blind-Spot Bias.

In some ways we couldn’t function without them. Cognitive biases are kind of like shortcuts in the brain. We take in so much information throughout the day that we have to find a quick, somewhat efficient way to make sense of it all. Add to that the fact that we are highly social beings and we desire almost above everything else to be a part of an “in group.” So we will overlook and ignore some things in order to keep our own personal beliefs and actions in line with the group to which we want to belong.

I would argue that most cognitive biases are not inherently bad, so long as we recognize them and can become more aware of when we are relying on them too heavily. But if we are aren’t self-aware, if we just kind of live on autopilot and let our cognitive biases take too much control, then what starts out as a shortcut can quickly turn into a train wreck.

As a Christian and one who pays attention to the social fabric of our world, I am simply astounded by  the types of cognitive biases I see derailing our lives and conversations, especially online. Let’s try to take a faith-informed look at some of the more common biases so we can become more aware of how they affect our lives and what we can do about it.
__________
I’M NO EXPERT, BUT…


One of the more interesting cognitive biases is named the Dunning-Kruger Effect. It’s a psychological phenomenon where the less a person knows about a particular subject, the more confident they are in their perceived understanding. In other words, they know just enough about something to be dangerous with it. But if they actually put in the time and effort to thoroughly study a topic, their overall confidence decreases with more knowledge. At some point along the way, as they approach expert status, their confidence slowly climbs back up. The graph looks like this: 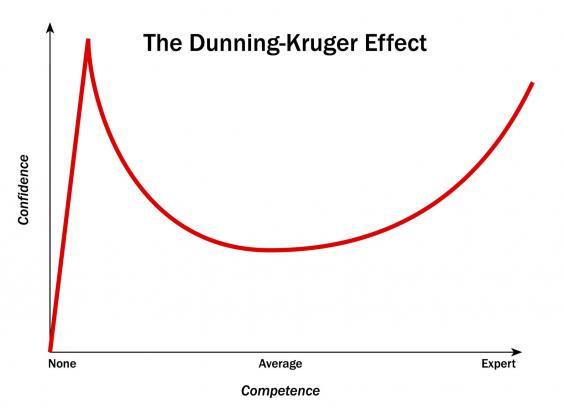 If you pay attention to all the different voices coming our way about this pandemic, you will see the Dunning-Kruger Effect in full swing. Those who know just a little bit are often the loudest, most confident, with the most certainty in their statements. But actual experts in the field speak with seemingly more uncertainty. They aren’t as apt to give straight-forward answers, and they readily admit that there are a lot of unknowns. Because here’s the thing about experts – ONLY EXPERTS KNOW WHAT THE UNKNOWNS ARE. And if they really are experts, they will admit where the knowledge base is unclear on any given topic.

Unfortunately, this preys on our bias towards ascribing credibility to those who sound confident in their arguments. Plenty of falsehoods are being spread from loud, confident-sounding novices, and that gets our attention.

As people of faith, we should always be somewhat skeptical of anyone claiming to have all the answers, especially if they are simply trying to out-shout the other voices. Jesus often got into arguments with the religious leaders of his day – men who knew just enough about the Scriptures to be dangerous. There is a level of humility that comes with true knowledge. If anyone thinks they have “arrived” and know all there is to know about a certain topic, then that’s when we must be on our guard.

One of the best examples of this is when Paul went through his conversion. He started off as a know-it-all Pharisee. Then the resurrected Jesus rocked his world and showed him how little he actually knew. This same Paul would go on to write, “I determined to know nothing among you except Christ and him crucified.”

When it comes to the pandemic, health and safety, or even religion, I would rather listen to the humble expert than the overconfident novice.
__________

For a quick guide to more cognitive biases, I recommend this article from Business Insider: 61 Cognitive Biases that Screw Up Everything We Do